Menu
Keep in touch
donate
Back to all

On 9 April 2016 Judy Jacka, Vice-Chair of Jacka Foundation for Natural Therapies, was made an Honorary Fellow of Western Sydney University.

The award was made in recognition of Judy’s leadership in the naturopathic profession and her roles as a practitioner, educator, writer and philanthropist. The award was part of a graduation ceremony at WSU, during which Judy received her Fellowship and was the guest speaker. She was introduced by Professor Barney Glover, Vice-Chancellor of the University, and Professor Genevieve Gregor, Managing Director of Goldman Sachs and Pro-Chancellor of WSU.

A transcript of Judy’s five minute address is below.

The Board of the JFNT congratulates Judy on this richly deserved honour. 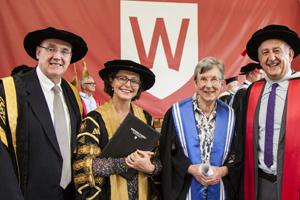 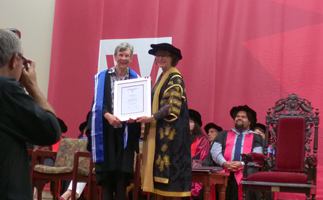 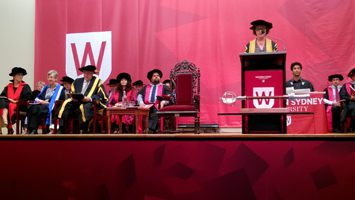 I am deeply honoured to be granted an Honorary Fellowship from this distinguished research-led university in relation to my work in complementary medicine. I congratulate all graduates here on their individual achievements.

At age 16 I left school after completing year eleven. Having always been interested in biology, I secured work in pathology as a laboratory technician at Royal Women’s hospital in Melbourne. The job involved working with rats and toads as part of the procedure to test women for pregnancy. After one year, I wanted a change and applied for work in haematology in the pathology department of St.Vincent’s hospital.

This work was more varied and gave one a definite understanding of health and disease when viewing the blood pictures. The desire for a more holistic and people-centred career developed, so I completed General Nursing Training at Prince Henry’s Hospital in Melbourne.

However, in that era of the early 1960’s I was somewhat appalled by the medical model. I observed that chronic disease in the adult patients did not improve. For instance, patients returned repeatedly with the same chronic medical problems.

I asked the casualty doctor whom I was assisting whether he believed in alternative types healing. He suggested visiting a couple of bookshops featuring healing arts and sciences.

There were very few books or courses in the 1960’s on lifestyle and healing. I asked the salesman at one bookshop whether he knew any doctors practising medicine with attention to lifestyle. At his suggestion I met the late Alfred Jacka, a naturopath who founded the Southern School of Natural Therapies.

In the late sixties when my two boys started school, I undertook the college diploma and worked part time in Alf Jacka’s clinic. Observations indicated that a synthesis of vitamins, minerals, herbs and homeopathy enabled individuals to overcome many acute and chronic disorders. I was inspired to help in the school, and from 1972 we gradually raised the standards in the medical and science areas.

In the same year I started my own clinical practice. My aim was to practise integrative medicine by not only using the synthesis mentioned above, but including energy work when appropriate, plus teaching meditation. Over the next twenty-five years, I had eight books on health and healing published.

As the college expanded there was the practical problem of finding suitable premises. Our locations included a heritage house in Kew; classes in the pews at a Camberwell church; Lonsdale St in the Melbourne CBD above a blue movie house; and finally we purchased a building in Fitzroy that we had been renting.

During these adventures I was firstly principal of the school and then Chairperson. Our Course Advisory Committee of external academics judged the curriculum to be of degree standard by 1985. We later applied for government accreditation and in 1997 the Southern School of Natural Therapies became the first Victorian college to be accredited to award a bachelor degree in Health Science by the government.

Following a state and then federal inquiry into alternative medicine, several pieces of legislation were proposed which would have severely curbed the practise of natural therapies.

Of especial note was the Draft Standard on Vitamins and Minerals proposed in 1981 by the National Health and Medical Research Council. If adopted, it would have restricted anyone but a medical practitioner from prescribing more than minute amounts of vitamins and minerals.

Even at this time, in 1981, over 2 million people were using natural therapies in Australia. As a result of our efforts, 250,000 individual letters of protest were sent to politicians. We were told that this was the largest response to any issue since Federation in 1901. The Draft Standard was withdrawn.

In 1981 our school was constituted as a not-for-profit company. Until the educational aspect of the college was sold in 2010, to my knowledge, we remained the only Australian college with this status.

In 1984 the Inquiry into Alternative Medicine and the Health Food Industry was conducted by the Social Development Committee of the Victorian Parliament.

It became the most in-depth inquiry into natural therapies ever conducted and their report was finally delivered in 1986. As a result of the report, the Commonwealth Therapeutic Goods Administration later established a section devoted to Complementary Medicine.

In her summary of the Inquiry, the Chairperson actually stated that our profession was making a positive contribution to Australian health care. Our aim had been to gain statutory registration but the report concluded that we should not be registered because, paradoxically, we were found by the Inquiry to do no harm!

The college continued to expand and was accredited for degrees in acupuncture and myotherapy plus diplomas in massage. In the meantime I moved on from college work but continued my naturopathic practice which has now covered over 40 years.

The college was sold in 2010 enabling the establishment of the Jacka Foundation and providing funds for philanthropic donations to worthy institutes such as your own National Institute of Complementary Medicine (NICM).

So what is the future of integrative and complementary medicine in Australia? Over 60% of the Australian population now use natural therapies. There are over 100 courses in natural therapies and almost as many associations.

Obviously we need evidence-based medicine for the use of vitamins, minerals, herbs and homeopathy. Already there is more evidence than most people realise even for the subtle aspects of health and healing.
Suitable forms of research need to be developed to cover the principles and practice of integrative medicine, for it is often the synthesis of several therapies that provides the healing factor.

I salute the courage of Western Sydney University who continue to support complementary medicine, especially via the National Institute of Complementary Medicine, and the many significant research projects currently undertaken in connection with this institute. It is continuing to be rated as an ERA5 institute, meaning as you would know, Excellence for Research in Australia.

I conclude with a quote from your Vice-Chancellor and President Professor Barney Glover – “these results confirm what we in the university already know – we are a world-leading, research-led university making a real difference to people’s lives and communities through our research capabilities.”

It is a privilege to be associated with your university.

Impact of Jacka funding on NICM Health Research 2019 – an overview of people, projects and outcomes

Jacka Foundation for Natural Therapies is not able to provide you with personal advice about your specific health condition.
Consult your healthcare professional to check whether the information on this site is suitable for you.
Please read the full website disclaimer here.

We acknowledge Aboriginal and Torres Strait Islander peoples as the First Australians and Traditional Custodians of the lands where we live, learn and work.